The International Maritime Organization’s debates on maritime law for trade routes in the Arctic grew heated today as the delegate from Malaysia attacked the delegate from the United States of America after she attempted to edit existing maritime laws. “I don’t have the audacity to rewrite the rules, [they] want to further their own economic
Read More

In GA 2, the issue of the right to use Arctic waters was discussed among the assembled delegates. Thailand, Korea, and other prominent Asian countries argued for tariffs and other trade agreements to promote a more regulated usage of these waters among countries that wish to do so. The regulations include incentives to be more
Read More

The delegates of GA Plenary all share an eagerness to combat water insecurity and limited availability. The session opened with various ideas on the root causes of water issues; responses ranged from scientific to blatantly political. The most pressing and controversial root causes presented were the effects of corruption and global conflicts on the ability
Read More

In the “World Health Organization”, many nations from around the world met to discuss the growing concern of clean water access. Fresh water is not unlimited and nations are finding that certain countries, especially developing nations, are struggling to supply their citizens access to clean drinking water. Nations present took various stances on how to
Read More 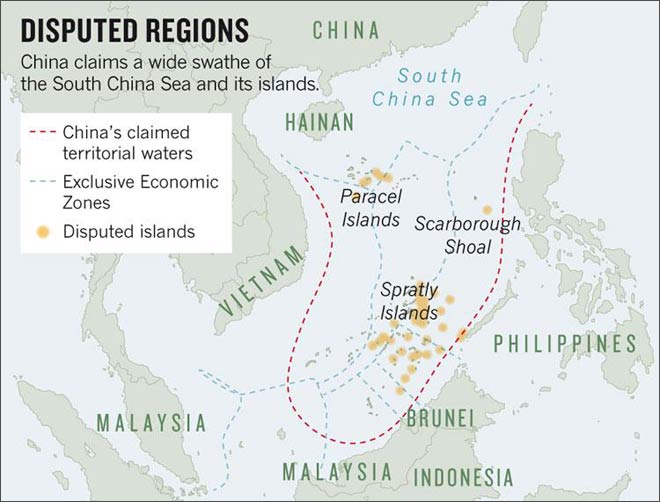 ATLANTA, Oct. 14 – The South China Sea is one of the busiest and most significant waterways in the world, due to the region’s abundance of natural resources and trade; however, many nearby countries dispute who has claimed over the territory.  These include China, Vietnam, the Philippines, Brunei, and Malaysia, but recently, China has expanded
Read More

Disputes over the South China Sea has been an ongoing problem, with China claiming that they have the ultimate right to the world trade route with proof of ancient documents. However, other countries such as Brunei, Taiwan, Indonesia, Malaysia, the Philippines, and Vietnam have all come forward demanding their rights to own part of the
Read More

The Sixth General Assembly is discussing possible solutions to territorial disputes in the South China Sea. This significant body of water is one of the world’s busiest trading regions. Several states accuse China of illegally claiming territorial rights from Western and other South Asian nations, giving rise to a spirited debate between the respective delegations.
Read More

Undeveloped countries expressed distrust towards their developed counterparts during the Commission on Science and Technology for Development’s discussions today. On determining the impact of technological change on water security, they cited the ineffectiveness of social media campaigns and the debt undertaken by countries who receive aid from developed countries. The divide created two distinct perspectives:
Read More